On my web site I want to set expires response headers as 0. I tried the following code on a  Page_Load of a dummy aspx page which I created in visual studio.

But, when I added the same code on Page_Load of the Master Page of the aspx page which I created in sitefinity it doesn't work. Same result on user control used on that page. 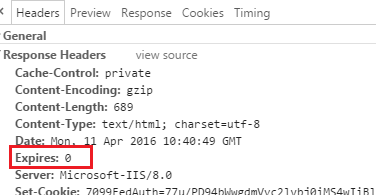 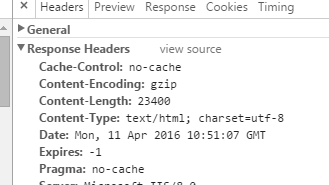 The header "Expires" is only added to authenticated backend users in Sitefinity when the In-line editing functionality is enabled. This is not visible to visitors of the site. To remove the Expires -1 header for authenticated Sitefinity users that currently are the ones that can ssee it. Disable inline editing functionality by going to Administration->Settings->Advanced->Pages and set the value of textbox Enable In-Line editing to False, then save changes. Since there is no Expires header added by Sitefinity add one if needed, for example adding it in web.config.


Regards,
Stanislav Velikov
Telerik
Do you want to have your say in the Sitefinity development roadmap? Do you want to know when a feature you requested is added or when a bug fixed? Explore the Telerik Sitefinity CMS Ideas&Feedback Portal and vote to affect the priority of the items
This thread is closed