Is there any possibility of fixing the documentation related to PAS timeouts?

I've asked a couple questions about this stuff in the past but I'm still a bit confused.

I'd like my MS agent sessions to be timed out and recreated after a period of inactivity.  Unfortunately the most obvious timeouts for this are not have the intended effect.  I've set both the "idle agent timeout" and "idle session timeout" to 20 seconds (image below) but it is obvious that my MS-agent sessions don't seem to be cleaned up.  The scenario for cleaning them up is to ensure that they pick up new r-code changes every time I launch my debugger (provided I wait 20 seconds). 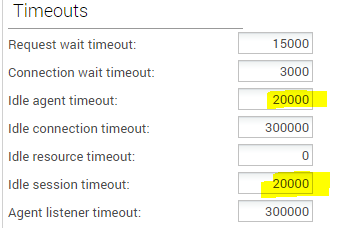 While I now have a script that uses REST to delete MS-agent sessions on demand, I'd rather it happen automatically after 20 seconds.

Based on the earlier conversations in the forums, am I right to assume that the setting,  "idle agent timeout"  will not have any effect unless "idle resource timeout" is entered (as either a zero or any non-zero value)?  Any help would be appreciated.

We are working on fixing the documentation, we have bug assigned and we will take care of it.

Also, for all the idleAgent/Connection timeout properties to be taken care, you have to enable 'idle resource timeout' and make set it some positive value. If you set that value to '20000' (20sec) then it will run the all the idle timeout parameters for every 20 seconds and see if any of them have to be applied.

Gotcha...  So the "idle agent timeout" is ignored unless the idle resource timeout is assigned.

Is there also a setting for timing out the individual MS-agent session (but not the agent process itself)?  Given the way those timeouts are listed in that screen (two types of agent timeouts with a session timeout in between), then a developer would naturally assume that the "session timeout" is an ***MS-agent*** session.  But my understanding is that it is a different type of session : a session-manager session.  Right?  It would be nice to also have an MS-agent session timeout.

PS. If there are properties being ignored, I think in the very least you should have a KB explaining when that could be the case.  I suspect many other PAS developers have spent a significant amount of time playing with these timeouts, rebooting tomcat, and scratching their heads in confusion.

Agree, we have a bug for that too(idleresourcetimeout for sessions) but not sure what the priority is. If you would like to submit as an idea, then please do.

Thanks again for your feedback Irfan.  Here is the best KB article I've found (thus far) on how the idleWhatever timeouts work in PASOE:

We have not yet implemented any idleWhatever timeouts, even though we'd like to.  Without timeouts there are consequences to deal with (primarily memory leakage since agent processes can run for a week at a time).

I'd say the biggest reason we've avoided idleWhatever timeouts is the fear, uncertainty and doubt.

I think most of my concerns would be addressed by a better user experience in the OEE console.  There should be a grouping of timeout settings, and (if you still want to do it this way) a checkbox that enables them all at once.  Internally the idleResourceTimeout can be handled as a checkbox because a timeout for activating a timeout makes no sense.  Finally, the labels and tooltips could all be reviewed for clarity.  Consider qualifying "session" with another term like "ABL session" or "HTTP session" or whatever.

I haven't had a chance to review the OEE console in OE 12 yet, and maybe some of these concerns are already addressed.